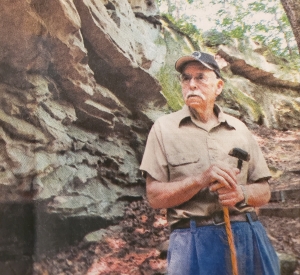 Darrell G. Livesay, 90, of Casey and formerly of Decatur and Marion (Lake of Egypt) passed away at 10:00 P. M. on Friday, January 3rd, 2020 at Heartland Healthcare and Rehabilitation Center in Casey.

He was born on April 11th, 1929 in Patoka, Illinois, the son of the late Virgil and Hazel (Garrett) Livesay, He married Delores Coombe of Macon Illinois in September of 1948, they had three children. He later married Carolyn Auten.

In 1987 Mr. Livesay retired from A.E. Staley in Decatur.  It was after his retirement that Darrell volunteered over 11,000 hours to Crab Orchard National Wildlife Refuge. While a volunteer, Darrell established the Rocky Bluff Trail Wildflower Walk program and laid out the section of the trail through Crab Orchard that completed the River to River Trail.  He received numerous awards for his volunteer work including U.S. Fish and Wildlife Service Regional Volunteer of the Year 1992, Illinois Department of Natural Resources Outstanding Volunteer of the Year 2006, Crab Orchard National Wildlife Refuge Volunteer of the Year 2010, River to River Trail Society Volunteer of the Year 1997, River to River Board Hall of Fame 1998 and 2008, and Woodman of the World Conservation Award 1992.  Darrell’s service was further honored by the naming of a spring near Dutchman Lake, Livesay Spring and the local PBS station featured him and the Rocky Bluff Trail Wildflower Walk in a documentary program.  Darrell was an avid outdoorsman who loved everything that it offered especially hunting, fishing and mushroom hunting.

Darrell is survived by a son, Marrell Dean (Dale Ragland) Livesay of Tucson, Arizona, a daughter, Regina (David) Washburn of Martinsville, three grandchildren, Megan Montanye, Ryan Washburn and Emily Devall, six great grandchildren and by several nieces and nephews. Besides his parents and wives, he was preceded in death by a son in infancy, Daniel Livesay and by a sister, Irene Gammon.

Funeral services honoring the life of Darrell will be conducted at 2:00 pm on Saturday, January 11, 2020 at the Triplett & Neal Funeral Home in Kinmundy. Josh Conley will officiate. Interment will follow in Sandy Branch Cemetery in rural Kinmundy. Visitation will be held from 1:00 pm until the time of services on Saturday. Memorial contributions are suggested to Sandy Branch Cemetery. You are invited to share your memories of Darrell and leave a condolence at www.triplettandneal.com